Singer Kim Wan-sun had only known music since debuting in her late teens but quickly found herself immersed in oil painting.

Likened to pop icon Madonna in her heyday in the late 1980s and the early 1990s, Kim first embraced painting when she was taking a break in Hawaii and attended a community college there in 2008.

In July, Kim was invited to show her work at the inaugural exhibition of GalleryFeelApp in Yongin south of Seoul, which showcases the work of several celebrity amateur painters.

Kim is showing 10 monochromatic works at the exhibition, which runs until the end of August, and most of them are already sold.

Bursting on the scene in 1986 she enjoyed great popularity for her dance moves, but time did not stand still for her.

"I just found it fun to work on canvas and immerse myself in my new hobby, so I'm so grateful for all of the attention," she told the Chosun Ilbo. "When I returned to Korea from Hawaii, I hoped to keep spending time painting, but once I did I got too busy to continue."

Kim was finally able to start painting again in lockdown.

"I started singing for a living too early in my life," she recalled. "I started working even before I had a sense of who I was. In retrospect, it was quite difficult. I became a big kid who just worked."

"I often suffered from a fear of disappearing at that time," she added. "I wanted to find out who I am and as I grew older, the desire to tell my story became stronger."

That is why most of her paintings are self-portraits. "Painting myself is a form of healing. I feel at ease and can compensate for my lost childhood," Kim added.

Her goal is to keep making music and painting pictures. "Music makes me happy because I can be with others, while the attraction of painting is that is it a solitary process. I couldn't choose between the two." 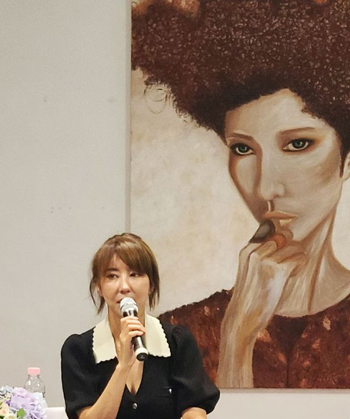