A growing number of young Koreans feel anxious about getting stuck in a job and will seize any opportunity to move to better-paying position.

While the older generation counted on a lifetime job in a single company, gradually rising through the ranks on a rigid system of seniority, young people are much more flexible. They are encouraged by headlines of people getting huge pay raises or massive stock options in certain fields.

Kim Seok-ho, a sociologist at Seoul National University, said, "The dream of lifetime employment has been shattered and people are increasingly nervous about working for one company for a long time, while younger Koreans are changing jobs to prove their own worth. But the trend is a huge waste from an employer's perspective."

Hunet polled 561 people who have worked for a company for less than three years and found that they expected to last only 2.8 more years in the job on average.

Some 27.3 percent expected to work just one or two more years, while 20.2 percent saw themselves sticking around for two to three years. Some 9.3 percent said they intend to change jobs in less than a year, while only 15.3 percent said they will work in the same company for more than five years.

A 29-year-old who has worked for a major conglomerate for two years said, "When my coworkers move to a start-up or tell me I should be more adventurous, I feel like I'm too complacent."

But job hopping does not always translate into higher pay and better perks, and many people end up regretting it. One 34-year-old who switched from a foreign company to a large Korean clothing firm said she is sorry she made the move because of the small wage increases she gets now.

"I got a pay raise when I switched jobs, but now the wage hike is capped at three percent a year so I'm wondering if I should move again," she said.

Others who quit their jobs after hearing about the success stories of their former coworkers end up having to spend a long time out of work. One 32-year-old office worker who moved to a start-up company early last year said, "I changed jobs looking at the growth potential of my new employer, but my hopes of making a lot of money from stock options have been dashed due to the weak stock market right now."

A staffer at another start-up said, "Quite a lot of workers hope to make lots of money quickly when they come here but often end up regretting the move. Established businesses should give young workers more opportunities to prove their worth." 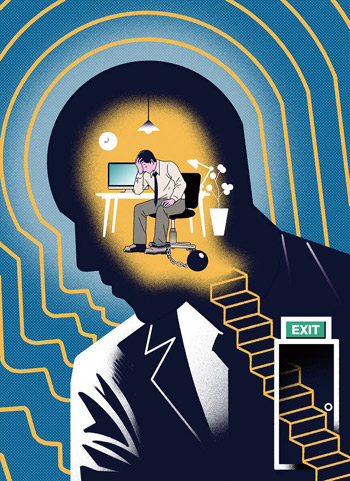