Jin Sol has gone viral by conducting live orchestral performances of the theme tunes of popular computer games like "League of Legends" and "World of Warcraft."

Jin (35) majored very respectably in classical music at the Korea National University of Arts and the Mannheim University of Music. But she is also the head of Flasic, a company she founded in 2017 to perform computer game theme songs.

"I used to be a computer game addict since middle school and played games in Internet cafés until they closed," she told the Chosun Ilbo earlier this week. "Even now I've finished several computer games."

Jin is organizing a gig at Lotte Concert Hall next month showcasing the music of the popular game "Lineage." Tickets sold out within minutes of going on sale. "Tickets sell depending on the number of loyal fans of a particular game," she said.

Game theme tunes are the new crossover hits as movie tunes take on the patina of yesteryear. They can be quite sophisticated. "In the early days of computer games, accompanying music was simply another sound effect, but now it is evolving into an art," Jin claims.

It may not be Beethoven yet, but dramatic music helps gamers immerse themselves in ever more complex fictional worlds.

"We are now seeing renowned global composers and orchestras making computer game music," she added. "Even in Korea, this field has tremendous potential for nurturing musicians and composers." 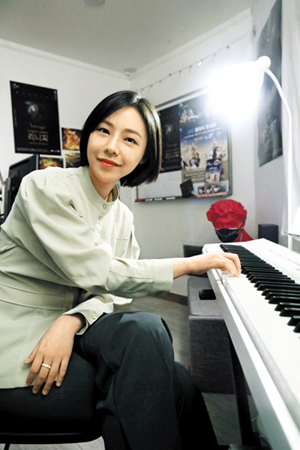