Rookie golfer Yoon Ina won her first ever career title at this year's Evercollagen Queens Crown, which wrapped up in Yangju, Gyeonggi Province on Sunday.

In the fourth and final round, the 19-year-old, who held the lead for three days in a row, finished with a 20-under 268 to make an impressive debut on the KLPGA this season.

"I'll prepare for every match to the fullest to come up with good results, so that I can be inducted into the LPGA Hall of Fame someday," Yoon said.

Yoon, who has already garnered attention among rookies due to her aggressive style of play with a driving average of 300 yards, drew large and enthusiastic galleries all day long on Sunday and celebrated her victory wearing a pink cape and holding a scepter instead of a trophy in a scene that looked like the coronation of a newly arrived star. 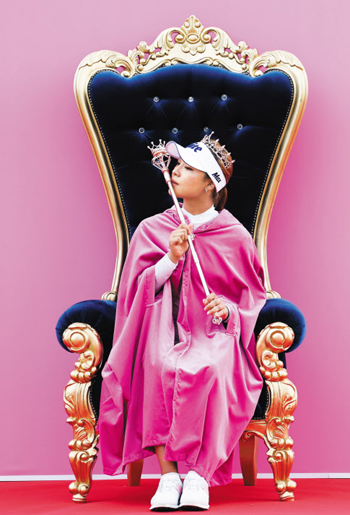