Spurs, led by manager Antonio Conte, were welcomed by thousands of Korean fans as well as its star forward Son Heung-min, who was already in Seoul after recently playing in four international friendlies for the Korean national team.

Almost all of Tottenham's key players are in Korea, including Harry Kane, Hugo Lloris, Dejan Kulusevski, Lucas Moura and Pierre-Emile Hojbjerg. Richarlison, a new addition to the Spurs squad this summer, returned to Korea just a month after playing a friendly against the country as a member of the Brazilian national team.

Some Spurs players could not make it. "Giovani Lo Celso, Tanguy Ndombele, Sergio Reguilon and Harry Winks will continue their pre-season preparations at Hotspur Way," Tottenham said on its website. However, multiple sources speculated that those footballers are not included in Conte's plans for next season.

Clément Lenglet, who joined the Premier League club on a season-long loan from FC Barcelona, reportedly failed to fly out with the rest of his new teammates because he couldn't get a visa in time.

Spurs will first face the K-League All-Star team in Seoul on Wednesday. The All-Star team consists of 24 of the best players in the league -- two each from its 12 clubs -- and is headed by Jeonbuk Hyundai Motors manager Kim Sang-sik. It includes Lee Seung-woo of Suwon FC, Kwon Chang-hoon of Gimcheon FC and Um Won-sang of Ulsan Hyundai.

They will face Sevilla of Spain's La Liga, who have won a record six titles in the UEFA Europa League competition, in Suwon, Gyeonggi Province on Saturday. The Spanish club arrived in Seoul last Friday. 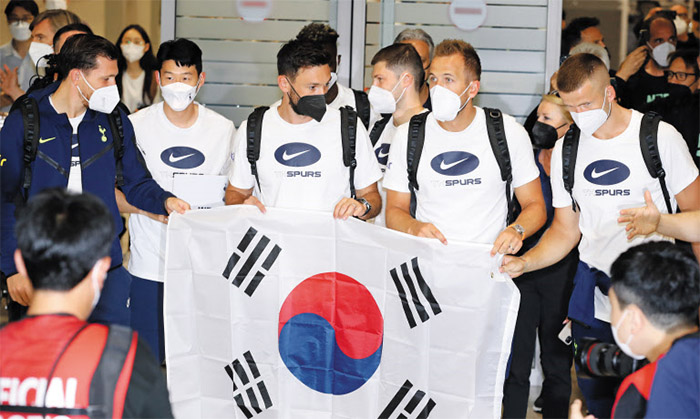