Son Heung-min of Tottenham Hotspur has become the first Asian player to win the English Premier League's Golden Boot, an award presented each season to the top scorer.

Son, who struggled in the first half in Spurs' final away match against Norwich City on Sunday, scored a goal in the 70th minute and another about five minutes later, helping Spurs hammer Norwich City 5-0. 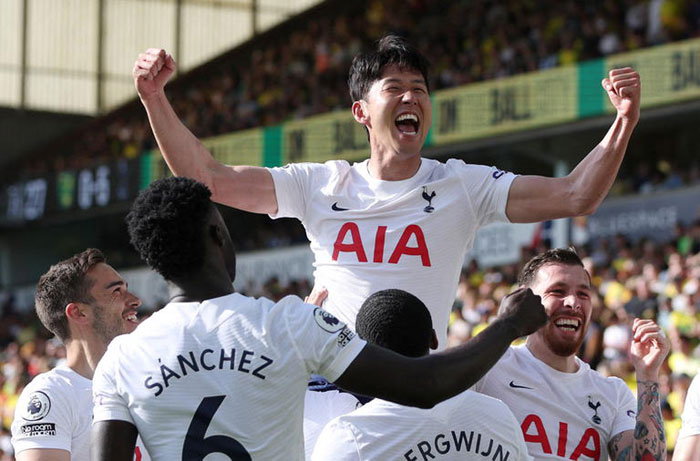 Son Heung-min of Tottenham Hotspur celebrates with teammates after scoring a goal against Norwich City in Norwich, England on Sunday. /Reuters-Yonhap

Son, who began Sunday's match one goal behind Mohamed Salah of Liverpool, dramatically scored his 22nd and 23rd goals of the season to share the award with Salah, becoming the first Asian player to win the top scorer title in any of the top five European leagues.

Salah added a late goal to give Liverpool victory against Wolverhampton Wanderers the same day, to end the season on 23 goals.

"I can't believe it," Son said in a post-match interview with the BBC. "I got really emotional. I dreamed of it as a child. Literally it's my in hands."

Son expressed his gratitude to his teammates, who visibly helped Son score once the team's victory appeared secure after the third goal by Dejan Kulusevski in the 64th minute. "The team helped me a lot at half time. They wanted to help me," he added. 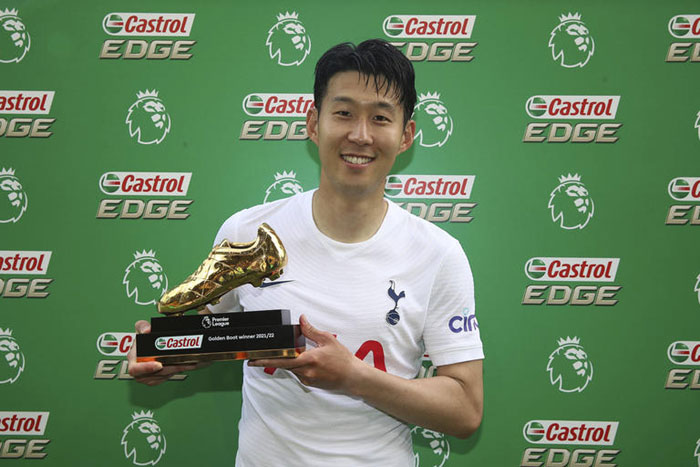 Son Heung-min of Tottenham Hotspur poses with his Golden Boot trophy after being named co-winner of the award for the top scorer of the season in Norwich, England on Sunday. /AP-Yonhap

With Sunday's victory, Tottenham Hotspur finished the season in fourth place on the EPL ladder, securing a place in next season's UEFA Champions League, contested by top-division European clubs, for the first time since the 2018-19 season.