“We Can Make a Difference Together”

David Kim, the Democratic candidate for the primary election, which will be held on May 22nd, officially qualifies to run for U.S. Congress.

March 8th, 2018, was a historic day for the Korean community and the citizens of the 7th Congressional District. David Kim, the son of hardworking Korean immigrants and education entrepreneur, is qualified to run for U.S. Congress. This was the first time for the Korean-American to officially qualify in Georgia to go on a journey to Washington D.C.

David Kim made some heartfelt remarks for his fellow citizens and the Korean community right off the bat.

“It is time to end the hostility, chaos, and divisiveness that is gripping Congress. I pledge to bring back common sense, integrity, and discipline. I pledge to truly represent all our people,” said David Kim. “Today, I am very honored to become a Democratic candidate for Congress in the 7th Congressional District.”

Nationally-recognized educational entrepreneur and innovator, David Kim is the Harvard-educated founder of a tutoring company---C2 Education---which he started in his college dorm room and now includes 180 centers across the nation. He helped educate over 50,000 students to realize their own American dreams as a go-to mentor, having created thousands of jobs across the nation.

His educational expertise and entrepreneurship have been recognized in such publications as Forbes Magazine, Entrepreneur Magazine, and Inc Magazine. He also has contributed to serving his community by involving the board of the Washington Youth Foundation and as a commissioner for the Montgomery County Commission on Children and Youth. His educationally pro-business experiences manifest he is a natural fit for the Congress post because education in this nation is the key to the American dream and values for all citizens including the immigrant communities and the foundation to the economic future.

To ensure the same opportunity and champion the idea that the American dream he experienced can be passed down to the next generation, that’s why he decided to run for the election. David Kim announced his bid for the U.S. Congress last June and he is expected to bring the same energy and innovation to Washington as a political outsider and consensus builder, keeping away from being a rubber stamp.

He wants to cut down on the divisive rhetoric and hash out so many legislative compromises regarding immigration and health care policies. He wants to put Washington politics gone off-the-rails back on track.

“I am not a traditional Democrat, but I think there is a strong desire for someone who is less partisan because our leaders have completely lost touch with the concerns of Georgia families and the American dream is becoming harder and harder to reach for too many,” said David Kim. “The national rhetoric surrounding immigration and health care also prompted me to run. A lot of the language with regard to those two issues that has been touted is definitely something that does not make me happy as the son of immigrants. We simply can’t afford the age of partisanship any longer. We need real service-oriented leadership. We need change verbatim.”
David Kim moved his family and company headquarters to Duluth in 2005 after falling in love with the community and potential of the area. Over the past 13 years, he has seen tremendous growth---new homes, new schools, and new businesses.  He is so proud to be a part of the diverse, vibrant, and successful area along with his wife MJ and lovely three kids.

He wants to create a practical change in the area where he served, serves, and should serve his people.
“I want to represent those voices who feel like they’re not really being represented accurately. I want to be a voice that’s independent minded---thinking about what’s best for the long term for all of us,” said David Kim, “I ask all the people in the 7th Congressional District to stand with us and vote for me on May 22nd. Together we can make a difference.” 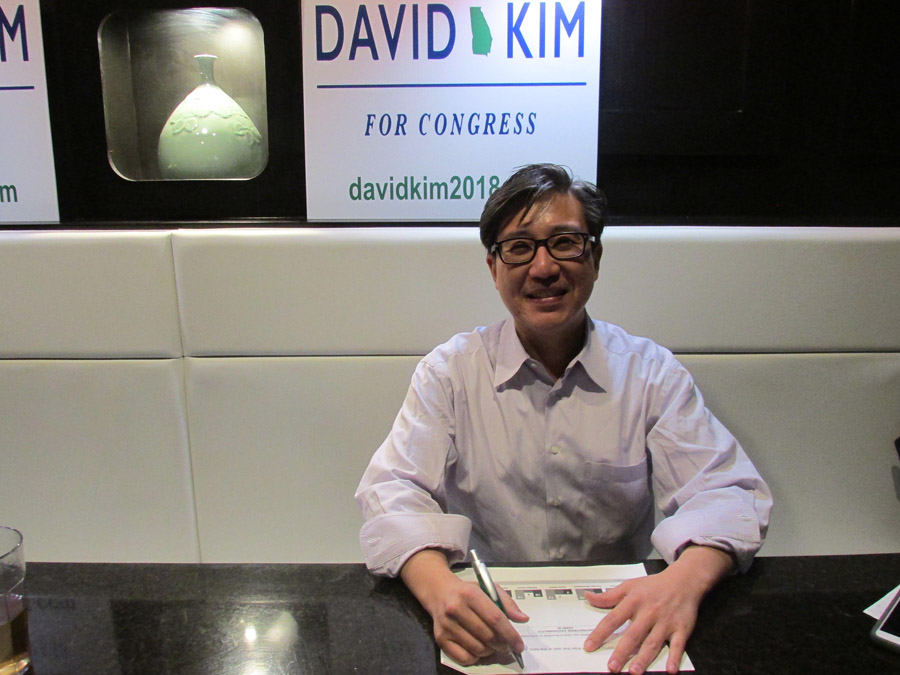 To ensure the same opportunity and champion the idea that the American dream he experienced can be passed down to the next generation, that’s why David Kim decided to run for the election. 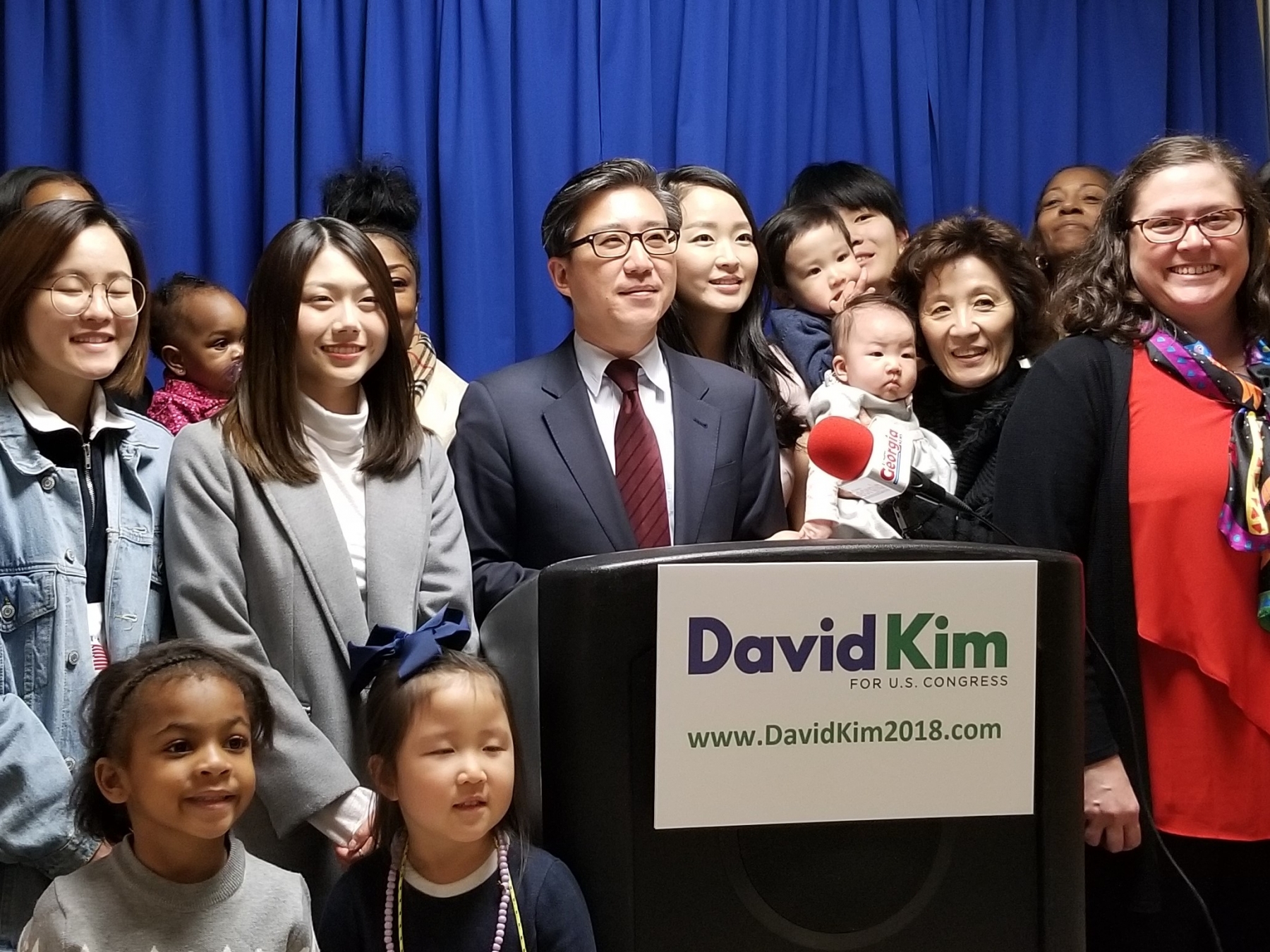 David Kim, the Democratic candidate for the primary election, which will be held on May 22nd, now officially qualifies to run for U.S. Congress. 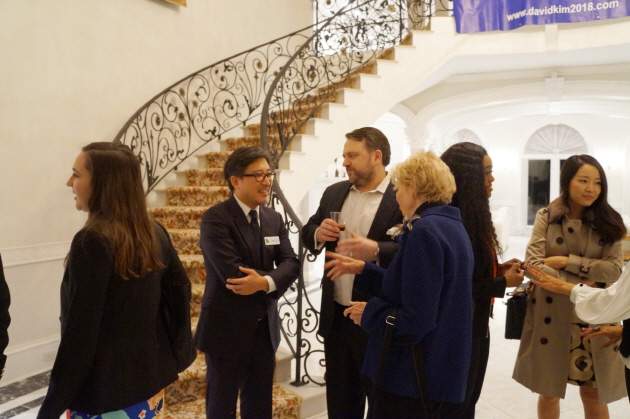 David Kim is listening to his supporters attentively.